Zoe's Quote of the Day

I said to Zoe as she was wrapped up in a warm blanket "You sure are toasty."

Zoe replied, "Well, I have been eating a lot of toast lately."
Posted by LogosKnitter at 11:21 PM 1 comment: Links to this post

Good News, the Veggies are growing

I'm always amazed when things grow. I mean REALLY! How do they know what to do? I set the movement going providing the right environment (soil, food, water, placement with access to light), but the seeds have done all the work.

These before pictures were taken on May 20th and I took the after pictures this morning - 8 days later. 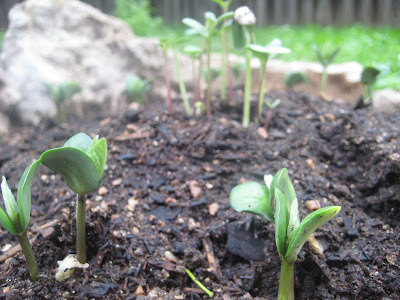 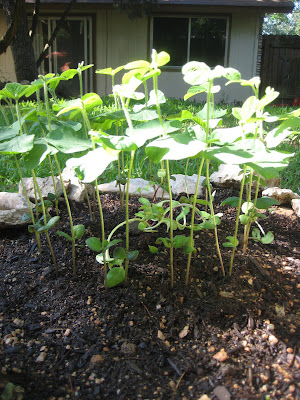 The soybeans are growing faster than the sunflowers (in the middle) which were suppose to act as their trellis. I'm not sure if the sunflowers are going to make it because the beans are blocking their light. 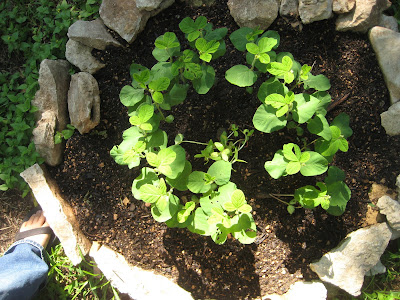 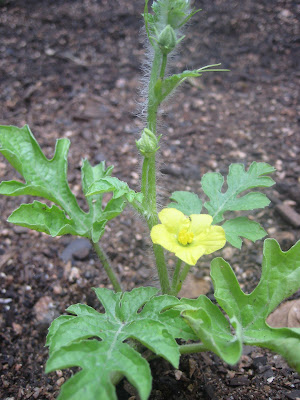 Watermelons - This morning
The watermelons are lost their flowers and are starting to resemble a vine. 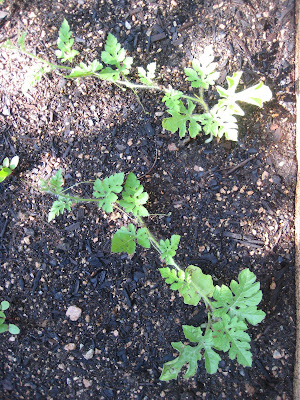 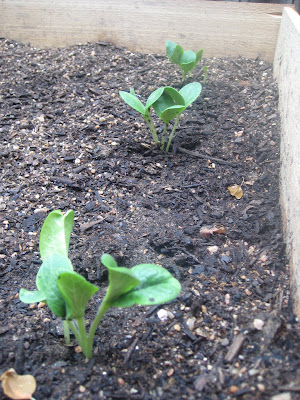 Pumpkins - This morning
We are going to have an amazing pumpkin patch by fall. 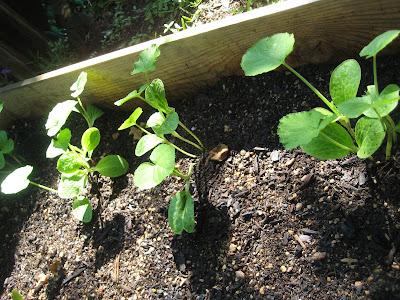 I had an extra spot in the square so I bought this pepper plant. It's grown a couple of inches already. 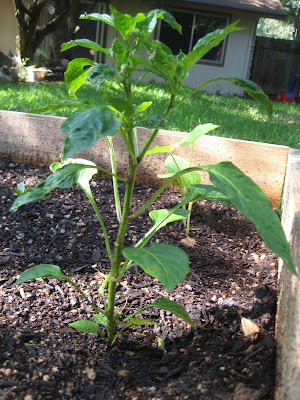 The spinach is just starting to sprout. 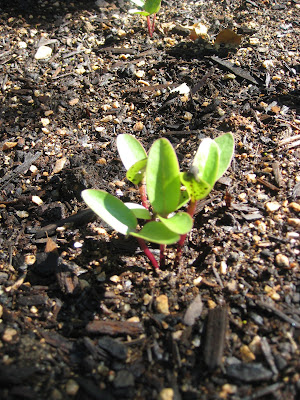 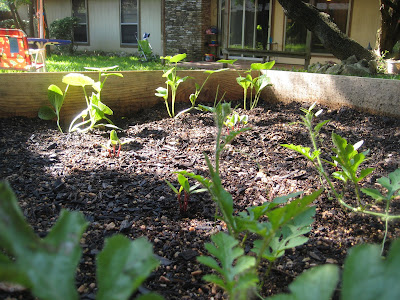 Posted by LogosKnitter at 10:09 PM No comments: Links to this post

Some pics of the garden and...

Thu Buddha Garden in the back yard 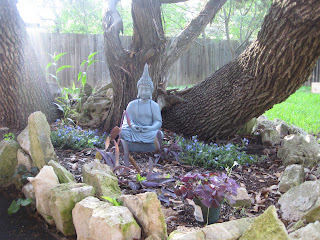 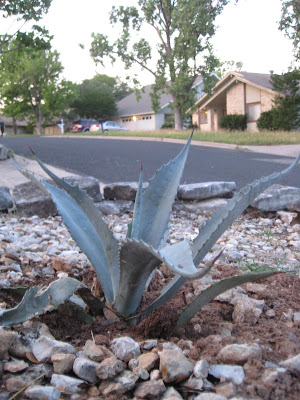 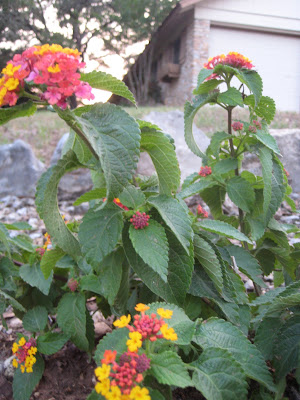 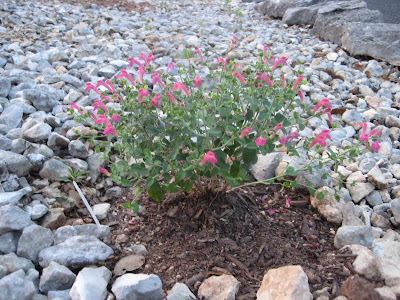 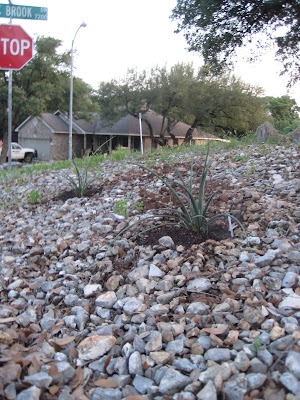 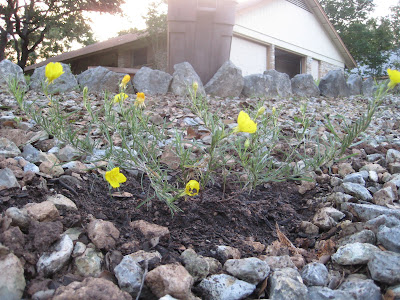 My cutie who has decided that it's time to start potty training. She's in the "flower bathroom" so I thought it was fitting to include in this post :) 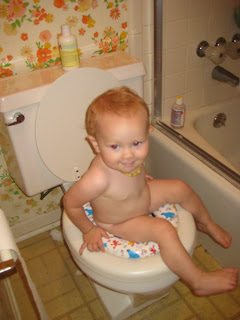 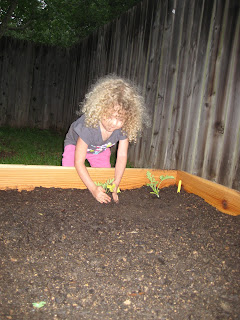 At last, the seeds are in the ground! The rain gods are pleased and have provided a steady sprinkle most of today and there's a chance for more this weekend.

The two starter plants are watermelons. The spinach is planted in the middle two rows, and the pumpkins are on the side by Godzilla, who I think is going to make a great scarecrow, but we shall see... 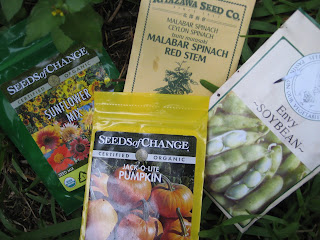 I also planted soybeans and sunflowers in the round bed but somehow those pictures were deleted from the camera. I'll take more tomorrow.
The sunflowers will be the support for the beans. Can't wait to see how that turns out. 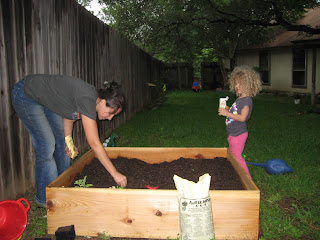 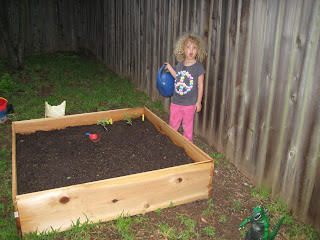 Dirt! And Lots of It

The past few days I've been spending time at my favorate garden center The Natural Gardener, which also happens to be about a mile from our house.
The girls and I filled a wagon full of flowers and plants for the front rock beds. Most of them are in the ground.
I went back the next day to bag my own dirt. I'm so glad that Skip came with is on his lunch break to watch the girls. I shoveled 10 50-lb bags. Holy crap, I get why it's so much cheaper to bag it yourself. I was so tired by the end that I had a hard time getting the bags in the trunk of the car.
I built a couple of raised veggie beds in the backyard, one from cedar board and the other from stone, then filled them with the 500lbs of dirt. The veggies go in tomorrow.
Stay tuned for pictures.
Posted by LogosKnitter at 11:24 PM No comments: Links to this post 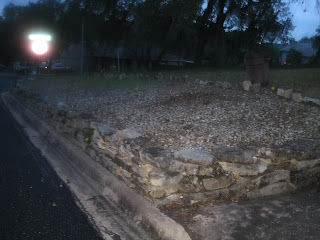 I dreamt last night. It's been a long time since I've slept like that.
Today was great! We got alot done with the house. Skip and I went to Lowe's without the girls. I forget how easy it is to get things done without them. Don't get me wrong I love those two little sweeties.
We bought a new range/oven and microwave to replace the old, non-functioning, avocado green dutch oven. We bought a glass pendant light for the guest bathroom is completely changes the looks of the room. Who know one light could do that. After I paint the walls I'll post pics. This is probably be our first complete remodel project.
For my summer vegetable garden I had planned on building 3 4'x4' boxes. Change of plans after finding out that cedar for each box costs $55. That's way more than I had budgeted, so I bought enough wood for one box that I'll hopefully get to put together tomorrow and I'm going to create the other raised beds with some stone that we have on the property.
I keep going back and forth on where I'm going to place the veggie beds. At first I thought that the only place that would get enough light is in the front yard next to the drive way, but now I think I might try to place them in the backyard so that I can work on them while the girls play. There's not much direct sunlight in back. I'm going to have to cut some of the large branches from a couple of the trees to make it work. Or maybe I'll there will be some in the front and some in the back. I don't know.
And speaking of rocks... I got to spend some more time in the front stone bed this evening. There was a light rain this afternoon and the weather was in the 70s. After the girls went to bed I pulled weeds until it got too dark. There's something very meditative about weeding. I can't put it into words just yet. I'm relieved to know that there are still bugs in our yard even though the sprayed pesticide for ants all over the yard a couple of days before we moved in. Arg. So much for my organic garden. At least for a few months. So far I've seen ladybugs, ants (ha!), doodlebugs, caterpillars, butterflies, a stink bug, a cricket, some beetles, and something that might have been a lacewing (still not up on all my bugs yet)... oh, and Zoe found a pink caterpillar. 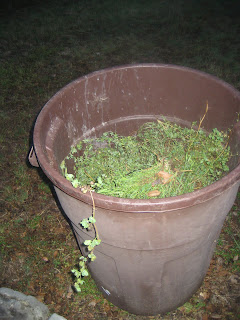 I spent about an hour weeding and only got about 10' or 15' done. Oh but I have a huge bucket of weeds as my price at the end of the day. What do I do with them?
Posted by LogosKnitter at 9:20 PM 1 comment: Links to this post

We moved. Mostly. The movers came at 8a and brought all the big stuff to our new house. We still have bits and pieces at the duplex. It's all been very surreal. It hasn't sunk in that this is *our* house. I still feel like the bank or the previous owner or someone could change their mind and we'd have to leave.
Skip's parents drove down this afternoon and got us started on the wood floors. Donovan mowed the front yard.
This afternoon I pulled weeds int he stone planting beds while Paige took a nap in the stroller. The weather was perfect: 70s, overcast, slightly breezy. I learned my first gardening lesson - weeds are much easier to pull when they have been watered. We have lots of sticker bur weeds. There are also hollies growing all over the front lawn. Not great on bare feet. I need to research how to get rid of them. Oh and the large holly bushes in front of the house are getting yanked up ASAP.
I dead headed the roses, which leads me to lesson 2: I need clippers :)
Posted by LogosKnitter at 9:12 PM No comments: Links to this post