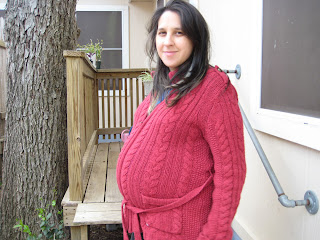 The Thursday before Paige was born I went to see my midwife Michele for my 38 week check up. I was ready for Paige to be here and hoping that she would say that Paige was on the way. Scottie, Michele’s apprentice, checked me and I was only 1 cm dialated, about 60% effaced and Paige was still high in my pelvis (about +3). Michele told me not to get my hopes up that she would be born before my 39 week check up. I was disappointed but thought I’d try to prove the prediction wrong.
After the appointment I quickened the pace of my walks around the block and concentrating on doing squats throughout the day. Something must have worked. On Sunday, Paige had dropped very low. I felt like she was going to fall out. It hurt to stand, to sit, to walk. I couldn’t wait for her to be born.
Monday was a normal day. I didn’t do much because I was feeling very pregnant and achy. Zoe didn’t take her nap, but desperately needed one, so I took her for a ride to the store with the hope that she would fall asleep before we got there. Once we got in the car I decided to drive around for awhile to give her a chance to fall asleep. I started having contractions, which I thought were Braxton-Hicks. For about the past month or two I’d been having BH contractions that would happen on and off for hours.
I wove around the UT campus area for about 30 minutes before giving up on the nap, when I noticed that the contractions were happening regularly. I started timing them about 6 minutes apart. Zoe and I stopped by the pet store and picked up some food for the kitties then headed home. By the time we got home the contractions were 5 minutes apart. The odd thing was that the contractions weren’t that painful – they were annoying – similar to menstrual cramps.
I told Skip that I thought that I might be in labor. His response was that we were out of bottled water and wanted to go to the grocery store to get some more. For those of you who know Skip you’ll see the humor in that. I persuaded him to hold off on going to the store until we talked to Michele and figured out if I was in labor.
Scottie came over to the house to check to see if things were in motion. I was 2cm dialated and confirmed that Paige had dropped very low and was sitting about 2” from the exit, so to speak.
I was in early labor, which was very strange to me. I didn’t experience early labor with Zoe. With her, my water broke, went into active labor and Zoe was born a little over 3 hours later. 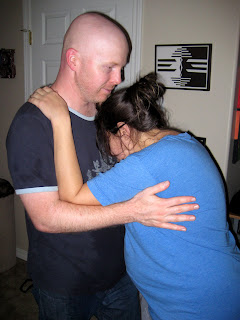 We called everyone to let them know that I was in labor. Things were moving slowly. Skip went out to get me some dinner and bottled water. Zoe went over to her friend Darlene’s house for the night. My friend De’Andrea came over to be apart of the birth. She teaches the Bradley Method of natural childbirth and offered her support during the birth. It felt like we were having a party. We were all sitting around the living room talking and eating cookies.
When Michele got to the house I was still at 2cm but the contractions were coming closer together and getting stronger. The party atmosphere was fading as I had to concentrate harder with each contraction. Michele told me that she didn’t think that Paige would be born that night and suggested that I get as much sleep as I could so that I’d have plenty of energy for the birth. She told me to send everyone home, take a Benadryl (which slows down contractions), take a bath and drink some wine. Scottie and Michele left and De’Andrea went out to get a bottle of wine. I took a Benadryl and sat in the bath. But I couldn’t relax because I couldn’t get comfortable during the contractions.
I only drank about 3 sips of the wine. The contractions were becoming more intense and I was beginning to feel drowsy from the Benadryl, so I went to lie down to do the Bradley relaxation stuff. When De’Andrea left the contractions were about 3 minutes apart. 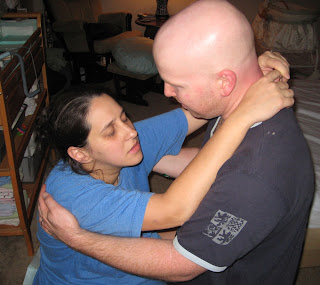 I had planned on using the Bradley Method of relaxation during labor. I read all the books and thought I knew enough techniques to get me through the pain. It was very easy to keep my body relaxed in the early stages of labor. I was able to manage the contractions laying down for awhile but I found that lying down was making me very tense, so I got up to move around. I couldn’t find a comfortable position to labor in and got into the shower.
The contractions were getting more intense so Skip called Michele and Scottie to tell them to come back to the house. He left a message for De’Andrea to come back also. Scottie arrived at the house around 11pm. I was in active labor at this point, and had given up on relaxing my way through the contractions. At this point I went back to the only thing that helped me during my labor with Zoe – moaning and screaming. I learned the power of vocalizing when I was taking a pre-natal yoga class when I was pregnant with Zoe. The instructor had us in an uncomfortable pose and asked us to vocalize when we got to the point were we felt we needed to move. I was amazed to find that I could hold the pose as long as I was groaning. In labor, unlike most of the rest of the time, I have no problem expressing myself at high volume.
Scottie was great, very warm and helpful. She suggested some positions for labor, the “dancing” thing and sitting on the birth ball, but I ended up back in the shower. I got into a rhythm. Between contractions I stood so that the hot water hit my belly, then when the contractions started I would lean forward and rest my head on Skip and let the water hit my lower back. I labored like this until it was time to push. Skip was great and talked me through each contraction with encouraging words.
With both of my labors towards the end I felt like I was outside of time, at least the linear way in which most of us perceive it. I’m not sure how long I was in the shower, probably about 45 minutes or an hour based on the time she was born.
I pushed on a birthing stool that Michele had set up at the foot of the bed. After the first push Michele said that the baby was coming now and she wanted me to get on the bed but things were moving too fast for me to get up there. While I was pushing Michele was talking to me, but I didn’t really hear what she was saying until she said “Nikki, you’re a teapot. Close your mouth.” I came back to the present moment and thought why is this woman calling me a teapot? Aha! As soon as I closed my mouth Paige crowned. Just then my phone started ringing. Paige was serenaded into the world by David Bowie singing “Changes” via the ringtone on my cell phone. Skip caught Paige on her way out.

We couldn’t have planned it that perfectly. It was De’Andrea calling. She had just got Skip’s message to come to the house but wasn’t sure when he left the message so was calling to see how things were going. Thanks De’Andrea. 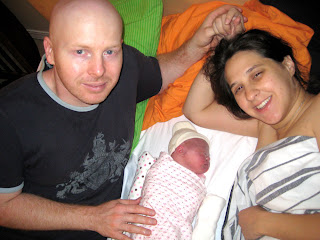 Paige was born at 12:27am on April 7th. This time I didn’t tear during delivery (Michele and Scottie – you rock!!) Paige had some bruising on her face from being smooched against my tail bone, poor thing, but was otherwise perfectly healthy weighing in at 6#5 and 19” long. She started nursing with gusto almost immediately after being born and then took a snooze. I felt amazing and didn’t sleep at all.
Skip was a great coach and even remembered some of the things he read in the Bradly books. Thanks, sweetie.
The next morning, Zoe was so excited to meet her new baby sister. 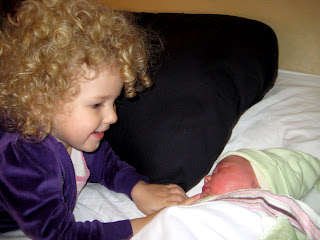 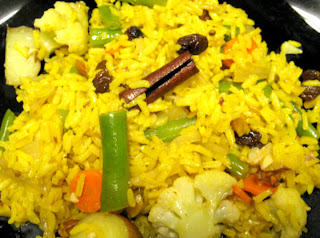 This evening while we were cooking dinner Zoe randomly says to me, "Mommy, I'm nocturnal". Then she added, "you're nocturnal, too."
Well that certainly explains a lot. All these 15+ years I've been dealing with insomnia, I've had it all wrong. I'm not an insomniac, it's just that I need to be sleeping during the day. My mistake.
Today I've been thinking about mistakes. Being over analytical and self critical I tend to focus a good amount of energy going over mistakes that I've made. From an intellectual point of view I understand that no one is perfect and that making mistakes is what it is to be human, but I've had a difficult time applying that kind of leniency to myself. Something clicked today. Lately, I've been reading books on positive/gentle disciple and one common thread is to allow your kids to make mistakes without shaming them for it because it's part of the learning process.
It's also a major component in the creative process. Without mistakes how can we create new ideas, art, concepts, paradigms, inventions, anything?
Zoe, Paige and I were on our way to the fabric store to get some fabric for Zoe's Halloween costume; she's going to be a Monster Catcher. I decided to see if I could discover a way from point A to point B with just a general sense of where I was going. The fabric store is located just north of where two major freeways intersect so the roads are all screwy in that area. It took us about 20 turn-arounds but we finally made it there. Zoe thought it was great fun to see me making some many wrong turns, and it really was fun. My mental map of Austin has expanded.
I'm on a mission to take the "bad" out of mistakes, and keep life playful.
Picture of the amazing vegetable biryani we made tonight
Posted by LogosKnitter at 9:38 PM No comments: Links to this post

This week in Zoe

Zoe: I'm scared. Turn off the dark.
---
Me: What are you doing?
Zoe: Sitting on an egg.
Me: hmmm
Zoe: It's a baby Zoe.
---
Zoe was very disappointed to realize that her beloved Daddy is a boy. Zoe is not keen on boys.
Posted by LogosKnitter at 11:58 PM 1 comment: Links to this post