Go out with a bang!

I get a lot of marketing emails. (Because it's the industry I work in, I sign up for a tons of lists to keep current on trends.) It's not often that one catches my attention, but this one cracked me up.

"We're screwed. You should be too!" just might be the best header I've seen in a long time.

Thank you OkCupid for making my day ;) 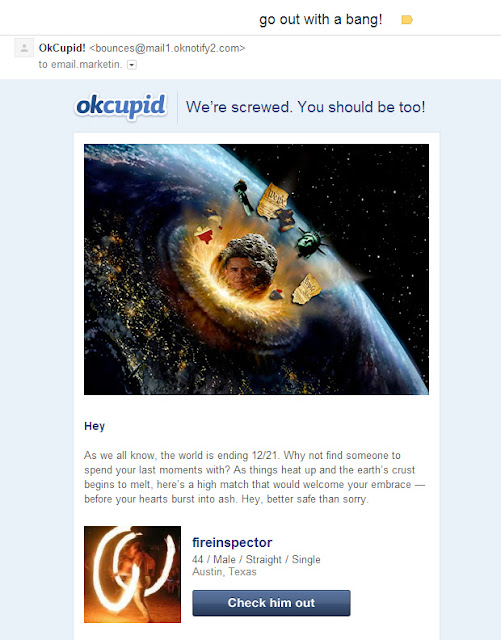 Posted by LogosKnitter at 10:55 AM No comments:

The Corporeal Soul turns sadness into preciousness and beauty.


- The Web That Has No Weaver

I stumbled across this gem today. I wanted to include an image with the quote, but it proved to be too difficult a task to find a sad image whose beauty was greater than it's sadness.

Anyway. This is mine.
Posted by LogosKnitter at 6:13 PM No comments:

I'm going to get a job soon. I can feel it. Maybe by the end of next week. Let's do this!
Posted by LogosKnitter at 1:13 PM No comments:

Email ThisBlogThis!Share to TwitterShare to FacebookShare to Pinterest
Labels: Life

We've had a relationship for some time now. The first time you came into my life I was 14 years old. Since then you have been a dreaded companion, leaving and always returning at the worst possible moments. You take away my energy, and in exchange give me dark circles under my eyes. But I think it's time for me to reevaluate the way I see you.

You've always be there for me when times where tough. I can count on you above all others to be by my side through the most difficult periods of my life. I don't fully understand your ways, but you give me time to ponder and evaluate my own ways, and where I am.

In Chinese medicine, insomnia is a sign of a disturbance in the Heart. Insomnia does seem more prevalent when my heart is heavy.

The last 3 days I have been alone, not in a real way, but more in an intellectual(?) way. I have talked to friends on the phone, I have emailed, texted, and been on Facebook, but my real life connections have been limited to very brief conversations while checking out at a store and the like. I have spent 95% of my time alone in my apartment. For someone like me who needs face to face contact, it's a strange place to be. Insomnia, you have almost doubled that time. I must need it right now, so that I can find my way to my proper path. It's becoming more clear, slowly. For the first time in my life, I have absolutely no regrets.

I'm also thankful to my friend Wellburtin, for keeping the depression at bay. When I go to those very sad places, I can come back out of them without getting stuck in the muck. I can even listen to those sad, sad songs that I love so much, and don't listen to often enough. I am forever grateful.

So Insomnia, I'm making my peace with you. I welcome you into my life. I will patiently wait to observe where you will take me. From now on I will call you my friend, and not my enemy.

Love,
Nikki
Posted by LogosKnitter at 1:24 PM No comments:


In less than a 24 hour time period, I found out that 3 companies who I had been interviewing with have declined to offer me a job.

Under different circumstance maybe this wouldn't be a big deal, but in my current living situation this is huge.

Job #1 - An online community management position with a know (and profitable) website. The job was half a mile from my house (I could have biked to work!), had great benefits, and a friendly work environment. An excellent job in almost every way. I was interviewed twice by the staffing agency. On a Wednesday afternoon, I interviewed with the hiring VP. At the end of the interview he gave me the task of creating an entire marketing plan and presenting it to all of the company VPs that Friday morning. I had a little more than a day to complete this task. On Friday morning, I showed up at 8:45. I had an interview, and then gave a one-hour powerpoint presentation to the top executives, all of whom interviewed me one-on-one that day. I was there until almost 4pm. These where not easy interviews. I was grilled on my marketing plan and made to defend it under a microscope by a group of very intelligent people. At 6pm that same day, I was by their HR rep telling me that they were very impressed with me and would like me to come in the following week to interview with the CEO. I was hoping that this was a formality, that the interview would be a little bit of him telling me more about the company and the position, some questions about my background and why I wanted to work there, etc. I thought I had this job. The interview with Mr CEO was slatted for one hour. It was not at all what I expected. The interview felt more like a police interrogation than an interview. He said that he wanted to start with college and go through every job I've had up until today. I had no idea the level of detail he wanted.

And on, and on, and on. For over 2 hours! Explain to me the purpose of asking me the name of a colleague who I worked with 8 years ago. Why is this information relevant? How does it convey whether or not I will be able to perform the job duties of the position that I'm interviewing for? What is the fucking point of an interview like this?

He gave no response to any of my answers, only wrote down everything I said, and moved on to the next question.

Almost a week later I find out that they are not offering me a job.

I can't believe it. After all of that work; nothing. This was the job I was counting on to come through.

What baffles me more than anything else is why it takes a company 11 interviews to figure out that I'm not the right person for the job. WTF people?

Job # 2 - A strange hybrid position, part account manager/part marketing strategist/part technical developer, for a growing agency. This place was strange. This marketing job reported to the CIO. My second interview was with the CFO, which is even stranger because this position has NOTHING to do with finance, but I did get a good story out of it. To goes something like this:
Instead of asking me about my background and why I'm qualified for the job, the guy wants me to do one thing: create a full sales pitch for the job I'm interviewing for. I now understand why I'm interviewing with the CFO. He wants to know how to monetize the work. During the course of this "interview" almost every sentence he says begins with, "When I was the CEO of a *very big* company...", and gives me a look and a sly smile to make sure that I know he was the CEO of a *very big* company. Yeah, I get it. It was a big, hard, company. Classy. This was the first time that I was flirted with during an interview. Very awkward.

The next week I was called in to meet with the CEO (BTW - What the fuck is up with CEO's interviewing people? When did this start becoming the norm?). This interview was more in line with what I had expected from the CEO interview for job #1. It was 30 mins long. He told me a little about the company, asked me a few questions about myself, and it was over. The only annoying part was this question:

"In the next 20 seconds tell me 10 to 15 adjectives that describe yourself. Go!"

Honestly, what information does this give an employer about me? How fast I think on my feet? How well I bullshit? What do they want to find out by asking this question?

It feels like something you would ask a game show contestant to trip them up. Really, when it comes down to it, most of the questions in interviews have this same feel. Is this a game to companies? Do these people get off on making people feel uncomfortable and getting them to jump through hoops for no pay?

Job #3 - a temp email marketing position filling in for someone while they are on maternity leave. The only downside to this job was that it was for 3 months. I was upfront and told them that I was waiting to hear back from two full time positions, but if neither of them came through that I would like to take this one. The company filled this role the same day I found out about job #1, a day before I found out about job #2.

I have been actively looking for full time work since January. I got a contract job in April. They didn't pay me for my work, and I've filed suit against them in California. I have been on at least 40 interviews, probably more. I have gotten to 3rd, 4th, and 10th interviews with companies. In the end they all go with other candidates.

At this point, I'm wondering if the universe is trying to tell me something. I think I need to find a new profession. Maybe I should go back to my plan of going back to school to get my master's in acupuncture, which means graduating with six figures of debt. and living in with that debt for the next 20+ years.

I don't know what to do. I don't know how I'm going to pay my bills next month. I'm sure I'll find a way, since I always do, but it's so stressful. The next step is lying about my experience to get a waitressing or bartending gig.

People tell me that there's a better job around the corner. I'm trying to stay optimistic. I really am. I just don't think I can do this for much longer.
Posted by LogosKnitter at 12:13 PM No comments:

Email ThisBlogThis!Share to TwitterShare to FacebookShare to Pinterest
Labels: Life

Waiting for the melatonin to kick in...

Insomnia, you asshole.
Posted by LogosKnitter at 10:57 PM No comments:

Email ThisBlogThis!Share to TwitterShare to FacebookShare to Pinterest
Labels: Insomnia

Holding this close to my heart

Action trumps depression. Confronted with a situation in which our feelings of powerlessness are more than just feelings, we choose to fight the odds, as an existential statement. We bellow our savage war cry in the face of the Roman Legions. We swim against the tidal wave. We attack Goliath with a slingshot, and throw stones at a Sherman tank, and ravage ICBMs with our ball peen hammer. We actively reject the reality of our helplessness; and as we assert defiance, we fan the embers of humanity wherever they live within ourselves and our brothers and sisters.
- Josh Mitteldorf

Posted by LogosKnitter at 5:53 PM No comments: